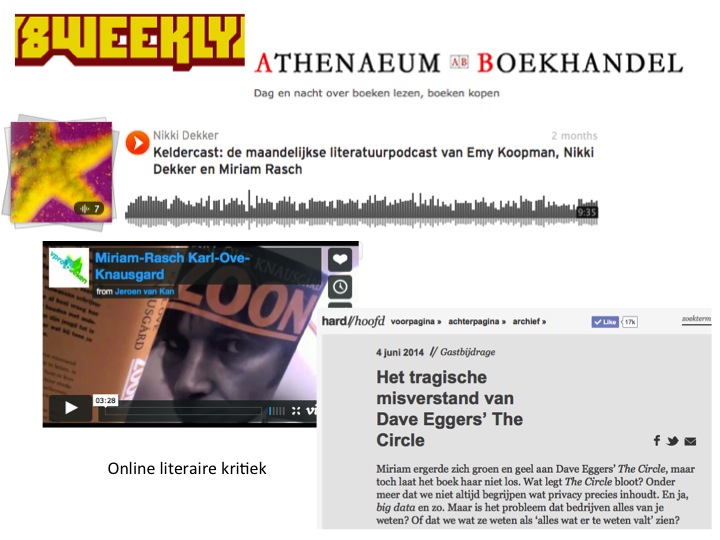 While research into literature in the digital era has mostly focused on procedural questions (e.g. the process of technological development, publishing, reading, and writing), the question of the literary characteristics of writing in the ‘new media’ is still an open one. A view on the literary product itself is mostly lacking; a reflection on what is called ‘content’ when talking about literature on the Web. How is literary writing influenced by the fundamental shift that the Web has brought about in the last 25 years? Can style and composition be noted to have changed, adapting dominant strategies from online culture? And what are the effects on the expressive meaning of these texts? In short, how does the internet effect the art of the written word?

The Web has been a place for literary writing from the start, but web-based literature is finally becoming mainstream – although hesitantly – with the rise of social media like blogs, Twitter and Tumblr. To start with the first, many authors have been using blogs for years, often as a playground or laboratory for new ideas or as a way to keep in touch with readers directly, while for some it has evolved into a more stand-alone publishing medium. Esteemed writers like Jennifer Egan and Teju Cole experiment in successful ways with publishing on Twitter, not just using the medium as another outlet for work that could also appear elsewhere, but using the medium-specific traits to produce new artistic works. A third example is the rise of ‘Alt Lit’ since 2010 – a scene of young writers taking online culture as the departure point for their artistic work, and often as the end point too; YouTube, Tumblr, and Twitter function as primary publication media. This is just a small portion of what goes on in online literary writing, proving that such writing has definitely grown into a full-fledged artistic form worthy of scholarly attention.

An investigation of online literary production on these mediums (e.g. blogs, Twitter, Tumblr, YouTube) will reveal changing characteristics of style, composition, and themes and thus lead to a further understanding of changing forms of expression in 21st century culture. A close analysis of form will be the point of departure, while at the same time acknowledging that there is no way to separate form and content. Examples of strategies for online writing styles are the notorious ‘short and snappy’ sentences; use of line breaks instead of indentation to mark paragraphs; non-linearity in narration; and composition forms such as the ‘listicle’ (an article in the form of a list); and the major uprising and adaptation of the essayistic form. Also the use of images provides an example: using (photographic) images in a primarily textual artefact can be seen as a trend where ’traditional’ literary production takes on a strategy borrowed from the internet.

Through a focus on the medium-specific literary traits of writing on the Web as found on different (social) media, where established authors experiment with new forms informed by online culture, I will research how web-based styles of writing act upon literary production. What makes these new literary forms distinctly different from ’traditional’ writing? Moreover, if we consider literature as an expression of society, culture and personal identity, what effects does the webbyness of these texts have – which changes in meaning and engagement can be inferred from the medium, looking at a broader societal perspective?